Alvin Straight: “Well, the worst part of being old is rememberin’ when you was young.”

David Lynch coined this his “most experimental movie.” -IMDB- 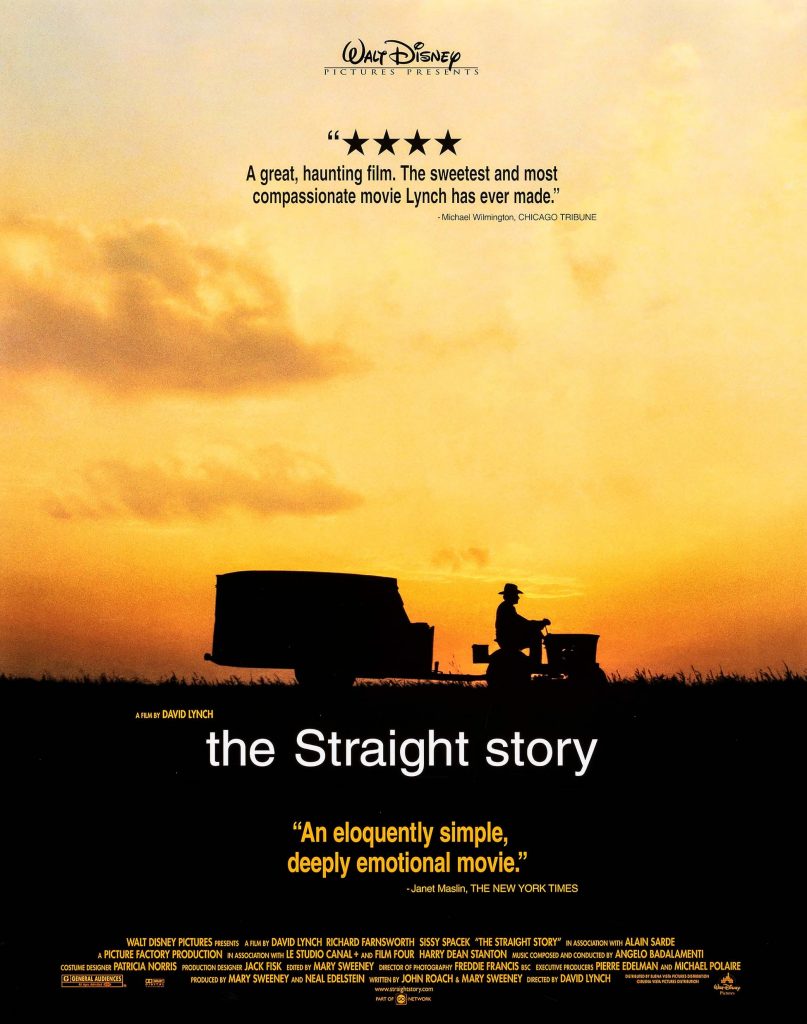 The first two title cards that appear at the beginning of THE STRAIGHT STORY read “WALT DISNEY PICTURES PRESENTS” and “A FILM BY DAVID LYNCH.” Being very familiar with David Lynch’s work, these two title cards seemed an odd pairing (The film’s rating of “G” seems strange as well.) and as the movie’s journey began to unfold, expectations settled into place as I kept waiting for everything to break off into the kind of surreal world that Lynch is known for. Bizarrely weird outings like BLUE VELVET, TWIN PEAKS and WILD AT HEART didn’t prepare me for the emotionally rich, bitter-sweet and sentimental tale that Lynch created with THE STRAIGHT STORY. Being a pleasant change of pace from his previous work, the film showcases the director’s ability to do something very different and pull it off perfectly and I have to admit that by the end of my viewing experience, I came to the controversial conclusion that, in my opinion (I know a lot of David Lynch’s fans are probably going to disagree with me), this is his best film.

THE STRAIGHT STORY takes its inspiration from the true story of Alvin Straight, a seventy-three-year-old man who drove his riding lawnmower 240 miles to see his ailing brother. Living in the small town of Laurens, Iowa, with his mentally challenged adult daughter Rose (Sissy Spacek), Alvin leads a rather slow life. One day when he falls to the floor and can’t get up, he is taken to the doctor and given the news about some health issues that will affect the rest of his life if he’s not careful. He has bad hips, his eyesight is failing and he’s developed emphysema from too much smoking. But that’s not all. Worse news is coming. One night while Alvin stares out the window admiring a storm, his daughter answers the phone and is given the news that Lyle, Alvin’s brother, has just had a stroke. After much consideration, Alvin decides he must make the trip to see his brother, but with his poor eyesight and bad hips, he can’t drive a car. That doesn’t matter though, because he knows that he has to go and feels that this is something that he must do alone. The two brothers had a falling-out and haven’t spoken in ten years. Now, Alvin needs to make everything okay before it’s too late. So, with the only transportation that he can operate safely, a lawnmower that will only travel at a speed of 5 miles an hour, Alvin sets out on the long journey of both self-discovery and redemption.

Make no mistake about it, THE STRAIGHT STORY is a road movie that slowly becomes more of a character study as its story unfolds. The script moves at an easy pace that mirrors that of Alvin’s lawnmower. Lynch and his screenwriters, John Roach and Mary Sweeney, take their time telling the story, which effectively allows the viewer the time needed to really connect with Alvin in order to fully understand why he must take this incredibly long journey. Yet, as much as it works as a slow burn, the movie is never boring and is always interesting in a very meditative way

The film especially slows down as the movie moves away from the character moments and viewers are given numerous montages of the land Alvin is traveling through, with its sweeping fields and long empty roads. Lynch utilizes cinematographer Freddie Francis’ stunning imagery to capture the majestic beauty of the countryside and mixes it with composer Angelo Badalamenti’s beautiful score to make these moments feel as calming as a relaxing weekend drive through the country. Whether it’s the framing of a deserted barn, the natural look of a small town with its empty streets or the images of the majestic farmland, everything is so beautiful to look at while the strings of Badalamenti’s score swell through the air.

The real-life plot that Roach and Sweeney have centered their script around is simple at best, but that doesn’t matter because the movie is more interested in Alvin as a person than the external story of a man driving a lawnmower to see his brother. Following the plot, the film seems pretty straightforward as it moves from place to place, that is until we, the audience, realize that even though the basic plot may seem to be moving forward the real story of Alvin, the inner story that the script is interested in, is being told through reflections of a time past. Through his interactions with the people he meets and the stories and insights he tells them, the screenwriters allow the other characters a chance to learn something about themselves while we, the viewer, are allowed to discover the truth of Alvin’s life. After all, as Alvin says at one point, “…at my age I’ve seen about all that life has to dish out.” One of my favorite moments in the film comes early on in his journey when he tells a young pregnant runaway an anecdote that teaches her about the meaning of family, which really has a double meaning considering the reason for the journey that Alvin has decided to take is to see his brother who he hasn’t spoken to in ten years.

Being more of a character piece, the cast of characters are probably the most important part of what gives this film its life. There are so many characters that come and go throughout the movie, most of whom have very little screen time and could have very easily been written off as plot devices, only there to help move Alvin’s journey forward. Fortunately, both the screenwriters and actors realized that these characters needed to have much more depth than the typical throwaway roles for Alvin’s story to really feel complete. The individuals that populate the town where Alvin lives each have their own quirky personalities, allowing us to feel right at home amongst them. Everyone feels organic to a small-town atmosphere and each actor gives such individuality to the small roles they inhabit that even though we spend very little time getting to know them, by the time they leave the film for good, they have effectively worked their charm on us. Then there are the people that Alvin meets on the road. Each is unique and interesting in their own way, many having their own little stories to tell. The actors all give them just the right touch of honesty to allow their stories to not only add to Alvin’s in a much-needed way, but also feel very complete on their own.

One of the supporting characters that gets a little more screen time (though not much more) is Alvin’s mentally challenged daughter, Rose. She is played by Academy Award winning actress Sissy Spacek (COAL MINORS DAUGHTER), who infuses some real heart into the character. Even though Rose is mentally challenged, she still seems to be very smart and caring. She is another character that could have easily been lost amongst the bigger picture, but Rose is made memorable because Spacek, Lynch and the screenwriters realized her importance in Alvin’s life and decided to treat her with the respect needed to make her much more than she first appears. Her story is given real meaning as we learn about the tragic backstory that has left a hole in her life.  One moment in particular shows her somberly staring out a window and watching a child retrieve a ball from the sidewalk. It’s a moment we don’t fully understand until Alvin tells her story to one of the people he meets and in that instance we grow to care for her even more.

Ultimately, the movie lives and breaths on the shoulders of Alvin, and the two-time Oscar-nominated actor Richard Farnsworth (MISERY, COMES A HORSEMAN) shines in the part. Alvin is a man who is set in his ways and this is made evident as he brushes off the advice his doctor gives him regarding his health as well as through his need to make this trip on his own. We are given a sense that this journey is a kind of penance and maybe Alvin’s punishing himself for whatever happened between his brother and himself, but we are never told for sure. It’s through the way that Farnsworth speaks Alvin’s dialogue, portrays the pain that comes with every step he takes and reveals his backstory to others throughout the film that allows us to interpret who this character really is. His conversations with the people he meets seem genuinely heartfelt as it becomes obvious that he’s getting just as much out of these encounters as they are. He tells a preacher he meets along the way, “Anger, vanity, you mix that together with liquor, you’ve got two brothers that haven’t spoken in ten years. Ah, whatever it was that made me and Lyle so mad… don’t matter anymore. I want to make peace. I want to sit with him, look up at the stars… like we used to do so long ago.” Farnsworth delivers his dialogue with such sincerity it seems to be coming straight from the his own heart.

Another standout performance in the film is by Harry Dean Stanton, who plays Alvin’s brother Lyle. This choice of casting is as perfect as it can get. Stanton is in only the last three minutes of the film and speaks hardly any dialogue, but the interpretation of the character mixed with the understated way that Lynch plays the scene makes it one of the most powerful moments in the movie and I can’t think of anybody else who could have played off of Farnsworth’s character so well, allowing the kind of ending we get to work as well as it does

In the end, THE STRAIGHT STORY probably shouldn’t have worked. A “G” rated Disney film directed by David Lynch has trainwreck written all over it. Lynch’s past work, which I have personally enjoyed much of, is very surreal and can be considered an acquired taste. FIlms like BLUE VELVET and LOST HIGHWAY are not made for the average movie-going audience. That being said, THE STRAIGHT STORY works perfectly on so many levels. It showcases a versatility in Lynch’s unique talent as a director while utilizing a fully realized cast of characters to take a simple story structure and make it into something great. I will say it once more, THE STRAIGHT STORY, in my opinion, is David Lynch’s best film.

Brilliant review! Thanks for sharing about this hidden golden nugget of cinema!